Dewalt tools are some of the most popular on the market. They can be a little expensive, but they’re worth the investment. The company has come out with several new models in recent years, and it can be hard to decide which one is right for you.

In this post, we’ll compare two of their most popular models: Dewalt DCF885 vs DCF887. We’ll look at how they both perform after two years of ownership and help you decide which one is best for you.

DeWalt DCF887 is a power-packed and most efficient impact wrench, it is equipped with a brushless motor providing you with the much-needed energy. Whereas DCF885 has less torque compared to DCF887.

If you search for an impact driver that could minimize your manual labor, you can consider using an impact wrench. Impact drivers do most of the physical work with ease offering high torque that can be used for drilling and fixing frozen nuts or bolts.

I have been using two of DeWalt’s products for approximately two years, so I thought of drawing up a quick and descriptive analysis of both tools. I have been operating DeWalt DCF885 and DeWalt DCF887.

As you will go through the article, you will get to learn more about the two devices. The information provided will assist you in clearing your doubt regarding which tool you should purchase.

Apart from a brief comparison of similarities and differences between DeWalt DCF885 and DeWalt DCF887, I will also be reviewing the two impact drivers mentioning their features and pros and cons.

With enough truthful information in hand, drawing up a conclusion would take no time of yours, and hopefully, you will end up having the correct device in your hand that would stand up to your expectations and serve your purposes well.

Primarily, dimensions are essential regarding a tool. Therefore, firstly I decided to compare the length, width, and height of the impact drivers.

Another important distinction that I brought out between DeWalt DCF885 and DeWalt DCF887 is that the former has a brushed motor, whereas the latter is equipped with a brushless motor. +

A Brushless motor increases the run-time of the tool by 60%. Nowadays, devices with brushless motors are more in use than the ones that are brushed.

DeWalt DCF887 includes one battery and supports two additional ones. This makes the overall weight of the drill lump sum 7.4 pounds, thereby making the tool a heavy one.

Comparatively, DeWalt DCF885 weighs only 2 pounds without a battery and nearly 4.4 pounds with the battery.

In addition to this, DeWalt DCF887 is more equipped with features. Being so, the price of the driver becomes nearly $261. On the other hand, DCF885 is much cheaper and costs only $139 approximately.

Many more differences were found as I used the two impact drivers. I have described them further in the article.

With the differences known, you will be able to set apart the two impact drivers from one another. As a result, I decided to point out the distinctions between DeWalt DCF885 and DCF887.

Following are some factors that differentiate one impact tool from the other. Please go through them for a deep understanding of the wrenches.

For instance, DeWalt DCF885 has only one battery which has to be purchased at an extra cost other than the tool. DeWalt DCF887, on the other hand, is itself equipped with a battery, and the kit comes with two more.

DeWalt DCF887 has a brushless motor that offers a highly commendable performance to the user.

Like other tools of DeWalt’s, DCF885 and DCF887 come in the original yellow and black colors. There is no difference made in that.

Moreover, the following similarities can be figured out between the two impact drivers.

DeWalt DCF885 is a lightweight and well-built product available to users at a nominal price. It works on a 20V Lithium-ion battery that gives superior performance to the tool.

Moreover, DeWalt DCF885 has an illuminating LED light that can assist you as you work in confined spaces and dark areas. The grip that you get to experience with DeWalt DCF885 is commendable.

Sometimes the powered torque of the tool, i.e., 1500 in-lbs, results in the impact driver getting off-balanced. Also, DeWalt DCF885 has a front-to-back length of 5.5 inches.

The impact driver supports an IPM of 3200. This makes the product a well-functioning one. Overall, DeWalt DCF885 is a budget-friendly choice for users and durable for a considerable amount of time.

DeWalt DCF887 is an impact driver loaded with all the features a user can think of! Firstly, it supports a 20V Lithium-ion battery that provides the much-needed performance to the impact driver. Being equipped with three batteries of such high power makes the tool a robust one.

DeWalt DCF887 comes with torque as high as 1850 in-lbs, which luckily can be switched to low speed depending upon the user’s needs. As a result, DeWalt DCF887 becomes a user-friendly impact wrench.

DeWalt DCF887 has an IPM of 3200, which is satisfactory as you work on most nuts and bolts. Also, you can run the impact driver at varying speeds, the Precision Drive being the lowest at 1000 RPM and the High impact providing the highest rotations per minute of 3200.

DeWalt DCF887 is a powerful and ergonomically designed device that does not lag in most features other than its weight. When the impact driver has all three batteries equipped, it weighs nearly 7.4 pounds which is too much for an impact wrench.

If you have to do industrial or heavy work, you can run the impact driver at 2800 RPM or 3200 RPM maximum.

The efficiency and perfection with which the device operates are indeed unmatchable. In my experience of two years, I faced no problem working on the impact driver.

Having read it till now, you might have got a clear picture that DeWalt DCF887 is a much better product than DeWalt DCF885. Firstly it is equipped with a brushless motor which promises to provide you with a higher and better efficiency even in long term use.

Moreover, the three-speed modes- Precision Drive, Normal impact, and High impact end up making the tool a multipurpose one.

No such feature is found in DeWalt DCF885. It works only at a single speed of 2800 rotations per minute.

DeWalt DCF885 stays ahead because it is available to the users at a lesser and more affordable price. For purchasing DeWalt DCF887, the cost is a pretty handsome amount. But then, you do not have to compromise with features if you go for the latter.

Not only this, DeWalt DCF887 has three super glowing LED lights that were of much assistance to me while working in my garage and other dark areas. But, DeWalt DCF885 has a single LED light that undoubtedly illuminates well, but it can not compete with DCF887.

DCF887 lags in the aspect that it is super bulky. With all its batteries, the impact driver weighs 3.8 pounds. DeWalt DCF885 has only one power source and it weighs 3.7 pounds without its battery.

If separate usage of both the tools is brought into consideration, then both work well. But if compared on specific grounds, then as per my experience of two years, DeWalt DCF887 is better and more efficient.

In my conclusion, I tried to do justice while reviewing and comparing these two of DeWalt’s impact drivers. Further, each person has different needs and preferences. Depending on those, you can try buying the tool that you feel is the most suitable one. 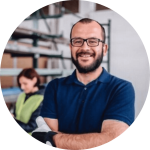